Like many other Americans, I sat in a dark movie theater and participated in the cinematic experience known as 12 Years a Slave. And of course, like many others who had watched the movie and immediately taken to social media channels, I posted my initial thoughts on Facebook about the movie upon exiting the theater.  As you can see from my screenshot below, I wasn’t exactly loquacious in my initial statements because I think I was still trying to process all that I had seen.

But as my posts started to get comments and feedback from my friends and colleagues who had seen the movie, I started to notice that many of my friends were polarized in their reactions. My black friends were pissed off and my white friends were defensive. Such is often the case when we have to talk about a topic of such a sensitive nature.

Allow yourself to feel emotions

When a movie deals with sensitive topics such as slavery, bigotry, oppression, and human exploitation, it’s bound to evoke some strong emotions. Personally, I found some of the scenes to be particularly emotional to the point of tears. There were instances where I felt anger and others where I just felt embarrassed. In talking with some of my Caucasian friends who had watched the movie, some even said that they felt a personal shame that their ancestors may have played a role in the enslavement of others. Without giving any spoilers, if you haven’t seen the movie yet, I’m going to forewarn you that it will take you through many emotional lows. The subject matter isn’t pretty by any means and unfortunately, there isn’t a happy ending. But the worst thing that  that you can do is refuse to feel anything. If it’s anger, so be it. If it’s shame, so be it. The key thing to remember is that emotions are often a great starting place, but they shouldn’t be where you end. And most importantly, action should never be taken solely based on emotion.

Focus on the message

As upset as I was by the injustices witnessed in the movie, I had to eventually bring myself to a place of calm. I had to push past my emotions and think about the key takeaways from the movie. Peep my status from that night.

And I’m happy to say that that status actually engaged quite a few people in a thoughtful discussion on the topics of oppression, economic disparity, and the need to teach real history in our schools. This is particularly helpful if you watch the movie with a group and plan to have some kind of discussion after it, whether it be organized or informal. You want to be able to articulate more than just “that sh%t made me mad!”. Okaaaay…what about it made you mad? Why? Is there a solution? How do the themes in the movie apply to what’s happening in society now?  I can guarantee you that millions of dollars weren’t spent on filming this project for the sole purpose of making you mad. There was an underlying platform. I know this because I’m an artist, and that’s how artists think (wink). 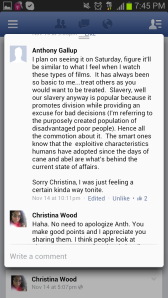 Which leads me to my next tip.

Running with the thought of an underlying message, it’s important to find relevancy. Most filmmakers are telling a story for a reason. Ever heard the phrase “Art imitates life”? Well this is historically true and most screen writers and film makers make these films because they found something in the story that is relevant to today. So in your discussions, rather than staying stuck on what was, try to steer the discussion toward what is and find ways to use the failed experiences of our past to build more positive experiences for our present and future. So for me, something that my anger sparked in me, was a renewed sense of responsibility for educating the people in my community about their civil rights, the importance of education, and investment in our communities.

The real content of any kind of revolutionary thrust lies in the principles and the goals you’re striving for, not in the way you reach them. ~Angela Davis

I adore this quote because this was revolutionary Black Panther, Angela Davis’ eloquent response to an interviewer who insinuated that revolution was synonymous with violence. She made a valid point. I would challenge all my fellow activists, educators, and game changers, to use this experience to think of creative solutions, ideas, and initiatives that will address the real issues that plague our communities. Stand on principle and build a solid platform for your cause. Assemble together like-minded individuals who want to see positive change and create a vehicle to see your ideas come to fruition.  I plan to filter many of my ideas through my non-profit, 20/30 Enterprises and am in the process of planning a seminar series entitled “Get Your Life” to motivate young adults to invest in themselves, be involved in their communities, and use their voices to affect change.

Daily Inspiration for Your Day

We're almost halfway through 2018. Who's reviewing their vision boards and progress towards their goals for the year?
%d bloggers like this: